From Prison Cells To PhD

​From Prison Cells To PhD: It's Never Too Late To Do Good

FROM PRISON CELLS TO PHD: It is Never Too Late to Do Good

by Stanley Andrisse, MBA, PhD
Get Your Copy Today! 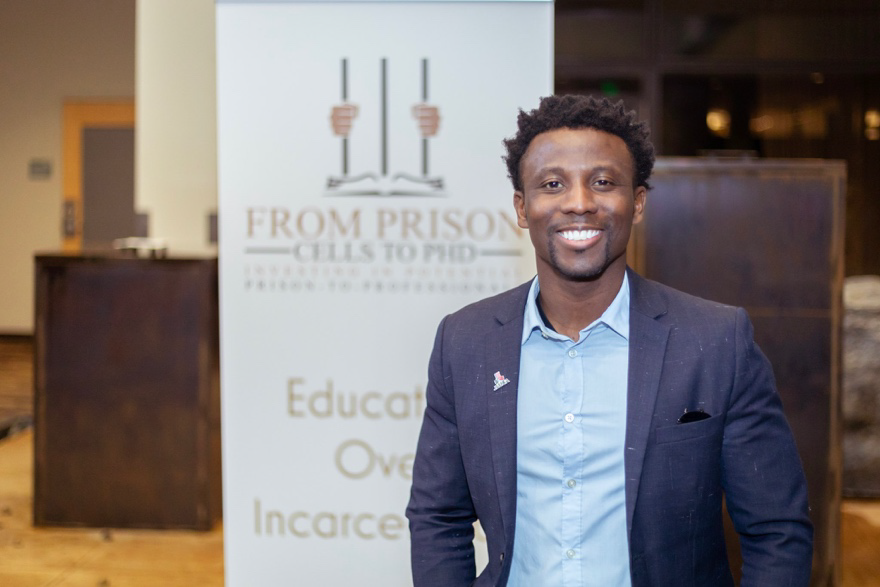 Dr. Andrisse’s service commitments include: Executive Director and Founder of From Prison Cells to PhD, board member on the Formerly Incarcerated College Graduates Network (FICGN), past president of the Johns Hopkins Postdoctoral Association, founder of the Diversity Postdoctoral Alliance, member on several local and national committees aimed at community outreach, youth mentor,
motivational speaker, and community activist.
​
Galley available electronically at this link or in print upon request.

Q: What inspired you to write From Prison Cells to PhD?
​
A: I am a formerly incarcerated person with three felony convictions, sentenced to ten years in prison. I was once told by a prosecuting attorney that I had no hope for change. I am now an endocrinologist scientist, an alumni faculty of Johns Hopkins Medicine and a tenure-track assistant professor at Howard University College of Medicine.
​
I feel compelled to share my story with others to help inspire change. Many people had been encouraging me to share my story publicly and widely. It started with friends that witnessed my journey and transformation, but eventually as I began sharing my story with smaller groups, people like the late Elijiah Cummings and Baltimore City State’s Attorney, Marilyn Mosby began encouraging me as well.

Caryn York, executive director of Job Opportunities Task Force, a Baltimore City nonprofit, had been urging me to come testify to the state legislature and help her “Ban the Box” on college applications in Maryland. In February 2017, I testified and was immediately approached by a Washington Post journalist. My story made front page and ever since then I’ve been on a national and international roller coaster of two to four speaking engagements per week with audiences from several dozen to thousands. All of whom had been eagerly asking me, “when’s the book coming out?” Here it is.
​
​Q: What do you hope is the biggest takeaway from the book?

A: It is never too late to do good. True change is possible. People with histories of serious crime and violent behaviors have the capacity, ability, and strong desire to be full participating members of and contributors to society. We (society) need to open the door and provide that access and opportunity.
​
​Q: What are you most proud of when you look back on your career? What drives you to keep going?

A: I’m most proud to be a husband to my beautiful wife, Stephanie, and a father to my little angel, Ashlynn Odette. My biggest fear upon returning from prison was not about finding a job or getting into school, it was that I would not find happiness. I found it. I’m also proud to have made it to where I am without compromising who I am.

A: Be patient with yourself and the world. The advice is less to the kids and more to the adults, teachers, and authorities surrounding the kid. People age out of crime and deviant behavior. I doubt there’s a single person in the world that could say there is absolutely nothing they did in their 13- to 24-year-old period that they wouldn’t consider doing differently had they had their 30+ year old way of thinking. Teenagers make poor decisions. It’s human. It’s the way we were designed.
​
​Q: If someone wants to get involved in prison reform advocacy, where do you suggest they start?

A: Start with building the courage to have these difficult conversations with family and friends. Start a dinner conversation about why we should be giving access and opportunity to people convicted of serious crimes. To do this. To be able to make this argument, you have to become knowledgeable on the topic. Thus, connect with a local or national nonprofit doing the work, like my organization, From Prison Cells to PhD (https://www.fromprisoncellstophd.org/) or Unlock Higher Education (https://www.unlockhighered.org/). Attend their events. Meet the people you hope to advocate for. Become proximal to the people, problems, and issues. There is great power in proximity.
​
Q: What is something readers would be surprised to learn about you?
​
A: The book has been many years in the making. And I've spent many nights in deep thought debating whether I should share such personal events in my life. Some of these traumatic events I've never shared before. Not only did I have to vividly relive them, but I contacted the people that lived them with me for their consent. For a few, it was too difficult to relive and for a few that are no longer living, family gave their consent. It took years to press the send button on some of those conversations. Through the entire process, the driving belief that pushed me forward was belief in a greater good, a belief that this will truly help, a belief that
my dad supports me in doing this.
​
Some days I felt as if I could not push forward in writing about such tragic events. In those days, two songs really helped me, Jonathan Traylor’s "I Trust You" and Maverick City’s “Man of Your Word”.
​
​Q: What is the best piece of advice anyone has ever given you?
​
A: It is never too late to do good. My book shares its first title with the nonprofit organization I co-founded, From Prison Cells To PhD. The subtitle comes from my dad. "It's never too late to reach your full potential," is a loose translation to the French-Creole phrase that my Dad used to tell me often and is included as a recurring theme in the book. That French-Creole phrase is "Il n'est jamais trop
tard pour faire le bien" (in french) and "li pa janm twò ta pou fè bien" (Haitian Creole). Haitian Creole was the primary language in my household growing up, but we also spoke French interchangeably. The true translation of this phrase is "It's never too late to do good". My dad's meaning was a combo of "It's never too late to reach your full potential." and the phrase of "It's never too late to do the right thing." He would tell me this in our several conversations focused on getting me to stop selling drugs and to get me to see that God had a higher purpose for me. I was too young and underdeveloped to get that message and he left me before I had the chance to show him that I finally began to understand it. This is a special phrase to me. I leaned on this phrase and his words through many of my tough times and the book is dedicated to my dad for that reason.